A Harajuku Moment, Creates the Readiness to Kick Heroin and Change. 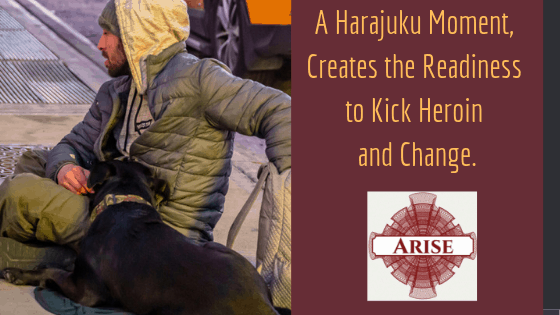 A ‘Harajuku Moment’ is when you become ready and willing to initiate a cataclysmic change in your life.

In his book, The 4 Hour Body, writer Tim Ferris describes a Harajuku Moment by retelling the story of CTO, of InfoEther Chad Fowler. Ferris explains that while Fowler was vacationing in Japan, he spent an afternoon in Harajuku. While he was shopping, he hoped to find some clothing for himself, but everything Fowler was interested in didn’t appeal to him because he was overweight. He told his friend, “For me, it doesn’t matter what I wear; I’m not going to look good anyway.”

Ferris explains that at this moment when Fowler expressed his dissatisfaction with his weight out loud he had his Harajuku Moment.

Events leading to my Harajuku Moment

After the fact which finally led to my sinking a needle full of heroin deep into my veins, I ended up back on the streets of NYC, begging to support my dope and coke habit, living in a squat, filled with regret, and believing I was better off dead.

After the initial pinprick, it took a little than 6-months to burn through 10’s of thousands of dollars. Getting high on heroin made me feel safe, secure, and invincible. For me, it’s similar to swimming in the security of my mother’s womb.  Of course, I’m not sure this is what it feels like to be a fetus, but for me, the time before my birth had to be much better than the life I fell into when I escaped from this bubble.

Nothing quite compares to that feeling of being surrounded in total warmth and safety- the problem is dope stops recreating this feeling. Instead, my days are spent trying to reach this high. But I never get there.

If you have a dope habit, you know what I mean. You understand the feeling and frustration. You reach the door to nirvana but never have the key. It never ends. Eventually, my frustration turns to hopelessness and regret. When I get to this place in my addiction, death seems much more welcoming.

When hopelessness sets in, I turn up my drive to stay gone.� I cannot find a reason to stop the swirl, nor do I look for one.

The swirl is my goal.

My daily routine, quite simply it is all I have left to live and die for. For me, the only way to reach the point where change is likely is through being enlightened or sickened by the way I  have chosen to live my life. However, this was not my ‘Harajuku Moment.”

One winter morning, I was sleeping in the ‘F-Train” subway station on 63rd Street. It had to be -20 with the windchill. But this station is buried deep underground. It’s possibly one of the deepest subway stations in NYC. The tiles are fiery orange. It always felt like walking into the depths of hell.

Two cops woke me rudely woke me up. They scooped me up and brought me to a nearby homeless shelter. It was freezing outside, so I played their game and went inside the homeless shelter. Any other time I would turn around and walk back into the streets the moment the police drove away. The cold was too much for me to handle, so I went inside.

Once inside, I was asked a series of questions, screened, and assessed. After the assessment, the intake person informed me that I had to transfer to Ward’s Island. On the island, a new state of the art homeless shelter awaited me. The rumors concerning Ward’s Island defined it like a gladiator academy. It wasn’t a shelter providing care and concern. It was quite the opposite. Wards Island Homeless Shelter was a community of despair, drugs, and decompensation. My over imaginative mind immediately connected this shelter to the futuristic movie settings of Bronx Warrior and Escape from New York.

In these movies, boroughs of New York City have been evacuated and serve as prison industrial complexes. In Escape for New York, the viewer gets to witness the Island of Manhattan as a futuristic -Anything goes-(except escaping) maximum security prison. Ward’s Island is where the modern world meets the future. Instead of working as an agent for change society’s idea for reform is to create a world where hopelessness, savage-like living, drug addiction, crime, gang affiliation, and disease breed far from the eye of the public.

Instead, I would rather go back to Shock Camp– pretending I was a Marine, instead of living on Ward’s Island- a gladiator academy posing as a homeless shelter.

The woman doing my assessment further explained that I was clinically depressed, had a severe substance use disorder, and was chronically homeless. In the morning my next stop would be Ward’s Island. On Ward’s Island, I would get the help I needed. Ward’s Island didn’t sound like a place where healing can begin. It seemed more like Cold Springs Harbor, Alcatraz, or any other hospital for those deemed unfit to commune with the public.

Chronic homelessness- What the fuck was this diagnosis?

She went on to explain that due to my being homeless for more than one -third of my life, it was doubtful that I could ever function in a ‘normal” living situation.  She told me that I was doomed to a life of living on the streets, sleeping on cardboard, and begging. I doubted I’d ever would aspire to much more than a life of squatting, begging, and shooting drugs.

Who the fuck was she to tell me what I could and couldn’t do? I knew the cure for my depression, homelessness, and severe SUD- Stop shooting heroin and cocaine.

It was that simple.

The Bloomberg Administration felt that there wasn’t any hope for someone like me. And they weren’t pretending that there was hope.

She would send me to Ward’s Island where I could get the help I needed. I looked up at her and said-” And not be an eyesore.  Or a disappointment to New Disneyland.” The vision for Manhattan. Remove all elements and character that make NYC, NYC. I asked her how she slept at night knowing that she was responsible for destroying the one thing – HOPE, which keeps so many homeless persons living on the streets of NYC willing to wake up and make it through one more day?

I stood up. I grabbed my clothes and headed for the door. The workers told me that I had two choices – Wards Island or Rikers. I asked on what charge. I advised them to get out of my way because there was no need for me to get violent and stupid. It was my life, and if I chose to live it on the streets without help, I would.

I walked back into the cold. Found a doorway to duck into and fixed up my morning wake up. The dope warmed me up a bit, but not enough. I walked to an all-night McDonalds went inside, cracked open my journal, and started writing.

I was pissed off.

Who was she to tell me that I didn’t have a chance?

I would show them-My anger peaked. It caused me to have a Harajuku Moment. I didn’t get sober immediately, nor did I attempt too. Several times over the next few months, dragging me back into shelters for assessment and placement for life on Ward’s Island became a regular game, the police, and I played.

Each time- I was able to walk out. Every time a patrolman stopped by my panhandling spot on Broadway and Pine, he’d ask my name and scribble it his little black book. The words, Chronic homelessness, defined me.

I was not about to live life in a shelter on Ward’s Island without a fight.

I would change and show these people how they perpetuate the problem. Their stigma was not about to crush me. I started to create a plan.

What is your Harajuku Moment?

If you have kicked, dope-what was your Harajuku Moment? If you are still living life on the streets- stay safe, hydrated, and keep your eyes open for you Harajuku Moment. Most importantly-don’t let someone stigmatize you into believing that you haven’t any hope. That’s bullshit. There is always hope.

Arise Recovery Coaching in NYC  Addiction Recovery  Blog.
What Do You Need To Succeed In Recovery Today? 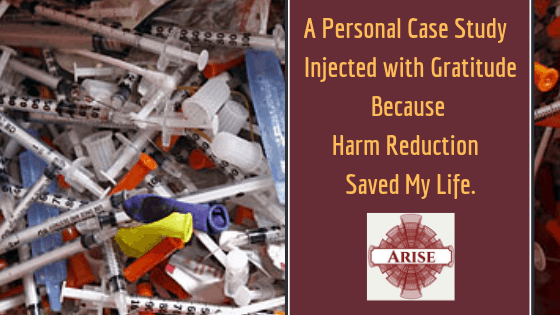 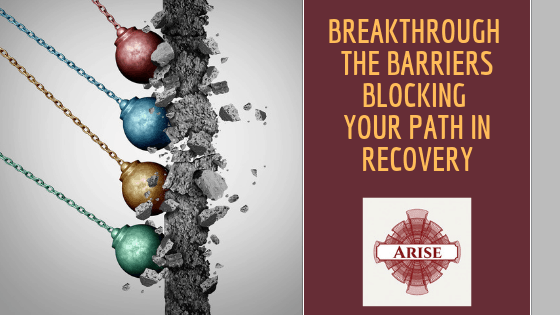 A recovery coach will help you recognize the barriers holding you back. Learn what roadblocks keep you from fulfillment in recovery and how to work through each one.
Read More